If you are looking for a property to establish a commercial plaza, or if you are a non-profit foundation, this position offers you a point, in one of the well-traveled vehicular arteries of La Gran Chorrera, since it is the official bus route that travels to the capital of on express routes and on the way to the capital city, internal routes to neighboring communities in the district of Coco de La Chorrera, very close walking a few blocks from the new headquarters of the Magaly Ruiz Health Center, in front of the bus stop. buses, in a growing commercial circuit and with a population demanding neighborhood convenience stores such as bookstores, clinics, laboratories, places for small fishmongers and Creole food restaurants, the labor and school movement is constant in the area.

If you don't mind that it's not on the Panamericana, but you believe in your own project with a vision of commercial success, this is a big enough piece of land with 2,816 meters. From the Super Extra of La Chorrera you will be in 2 minutes on the land by totally asphalt street, suggested for mixed commercial purpose and residential rentals for city workers and students of the Regional Center of Technology as well as the National. Also for synthetic soccer fields that are highly demanded for rental by academies and individuals. It is on a slope with the street, nothing that ingenuity and wisdom cannot solve, the slopes often allow to maximize the spaces for 2-storey buildings with excellent visibility of the premises from the street, everything is viewed from the perspective that is projected. Fully titled and with recent plans. Contact me for more information at 507-6470-9446 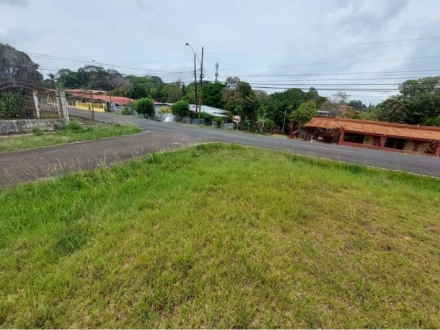