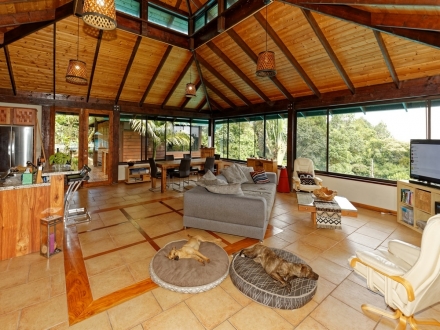 This unique Balinese-style estate, an oasis away from the noise and bustle of tourism, lies at an elevation of 1600m (5300 ft) just above Boquete on the eastern slopes of Volcán Barú, overlooking the mountain hills down to the Pacific Ocean. The house has been built with high-quality materials throughout, including a variety of different tropical hardwoods. Due to its unusual layout it can be used as a perfect home to live in; as a family home where the parents, in-laws and/or children have their own pod, or, as a small bed and breakfast. The main 900 sq.ft (83.6 m2) pod consists of a beautiful large open plan kitchen, dining and living room, all looking out through floor-to-ceiling picture windows framing the incredible view. The neighbouring 489 sq.ft (45.5 m2) pod is the master bedroom with en-suite shower and a huge walk-in closet. Imagine showering while enjoying the magnificent panorama over the mountains all the way down to the Gulf of Chiriqui. The third 489 sq.ft (45.5 m2) pod on the opposite side of the main pod is a mirror image of the master bedroom, but with sliding doors opening onto the large covered entertainment terrace. This pod, while originally built as a master bedroom with shower and walk-in closet, is currently being used as an office and library. The recently added fourth pod is a stand-alone 681 sq,ft (63.3 m2) casita, with a large en-suite bedroom, fully equipped kitchen and an airy dining and living room, built in the same style as the original 3 pods. The casita has arguably the best panoramic view of the entire property, sweeping from the Continental Divide down to the islands in the Gulf of Chiriqui. A large double carport, incorporating separate workshop and tool storage rooms, provides ample covered parking for two cars. There is sufficient outside parking for at least two further cars. The fully fenced garden is designed to provide both pleasure and attract the abundant birdlife the Chiriquí Highlands are so famous for. The beautiful palm fringed flower gardens around the homestead look out over the fruit-tree orchards where lemons and oranges, as well as avocado trees from Costa Rica grow in the rich black soil.  Fiber-glass hook-up offers the best internet connexion in the area.

House in Nuevo Arraijan, with three bedrooms, a bathroom and two parking lots, is on the corner and has a perimeter wall, easy access and in good condition. It has 420.80mts, with RE zoning. 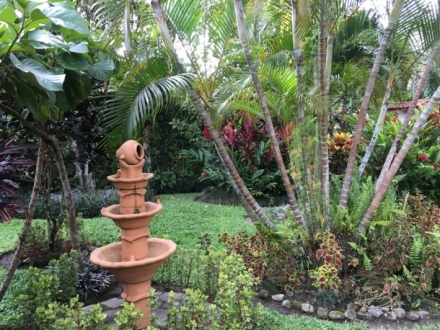 Located on a quiet and private street in busy El Valle de Antón, this house offers you all: Peace and quiet, but just a few steps from the bustling tourist town with its beautiful nature and spectacular views. Shopping malls and the world-renowned market are just minutes on foot. 3 bedrooms, 3 bathrooms in an impeccably designed and superbly maintained garden, with  a vegetable patch and orchard. The garden does not flood, as it is protected by cement walls.  Built in 2004, the roof is relatively new with insulated cathedral ceilings. The bedrooms have been remodeled and the water is gas-heated except in the master bedroom, where electric sources make sure you always have instant hot water. Wooden doors, two thereof brand new, airtight windows and the installations are also new. Air-conditioning is installed in the living area and in the master bedroom, although the comfortable cool weather hardly makes it necessary. Covered terraces and porches in front and behind the house. The house comes 80% furniture, as the owners will take some of their well-loved furniture collected from all over the world. El Valle de Antón The small town El Valle de Antón is located in the Province of Cocé, 120 km away from Panama City. The village is nestled in the caldera of the second largest inhabited volcano in the world. It is named by the "El Valle Volcano", a Stratovulcano. The "El Valle de Antón caldera" with a radius of 6 km was formed about 1.1-1.3 million years ago. Today the caldera forms the ground for the small town El Valle de Anton with its 6200 inhabitants with a lively es-pat community.. The floor of the valley is underlaid by deposits of a former caldera lake, filled with hot thermic water. The valley is framed by a lava dome complex which is formed by East-West movement of the caldera. The tops are known as "El Cerro Gaital" (1185 m), "El Cerro Pajita" (616 m) and "El Cerro Caracoral". The most recent important eruption in the underground was 13,000 years ago. It happened when the hot magma met the caldera lake water. Some of the last volcanic activities were measured in 1987. Basically, Panama is situated in the hot and humid tropical climate. El Valle, lying 600 m above sea level, boasts an all-season mild spring-time climate. Year-round average high temperature is 28° C, and the average night-time minimum is 20° C, with little variation between summer and winter. The dry season starts in the middle of December and lasts until the end of April. At this time the weather is sunny and very windy. But El Valle is also worth a visit in the rainy season because it usually only rains two hours in the afternoon and the place is more quiet than during the dry season. The rainy season is also called the Green Season: at this time nature shows at its best.  Today, El Valle is one of the most popular tourist attractions, hosting many retirees from abroad and weekenders, particularly from Panama City (many of them high-ranking politicians and businessmen), who appreciate the moderate climate and the extraordinary nature. 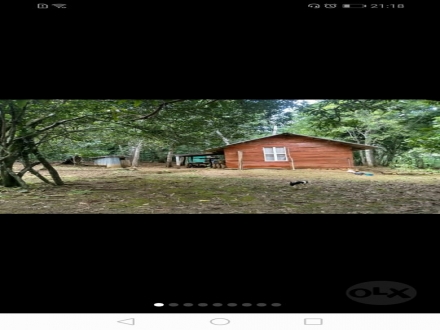