The original town of Gorgona was situated in what is now Gatun Lake.  During the construction of the Panama Canal, the town of Gorgona was flooded when the Gatun Lake was created.  The town was rebuilt in the form of Nueva Gorgona in is current location which is about 80 kilometers west of Panama City.

Nueva Gorgona, which is mostly commonly referred to as Gorgona, is a small town comprised of approximately 2000 people, and located just 3km from the more well known beach town of Coronado which is considered the hub, in terms of infrastructure, shopping and amenities of the Pacific Beach areas west of Panama City

In Gorgona and Coronado one can find several strip malls with a variety of amenties including:

The beachfront in Gorgona and the surrounding beach towns is a mix of white and volcanic sand, and the various stretches of beaches go on for miles. During the week you can usually have huge stretches of beach all to yourself.  There are also several surf breaks on the 4.2 kilometer of beach frontage that comprises Gorgona. 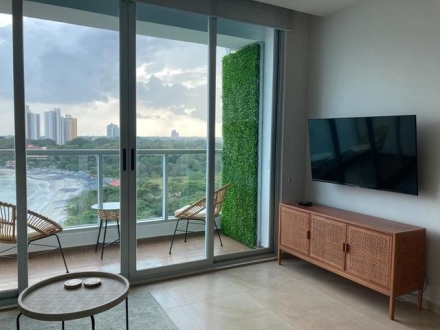 Comfortable 1 Bedroom Condo On The Beach For Rent