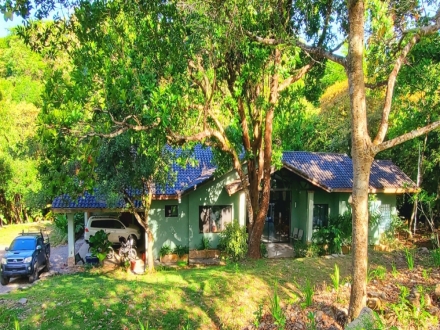 This 2-bedroom, 2.5-bathroom property has an open-concept with lots of natural lighting.  The open kitchen offers itself to catering chefs due to its size and equipment. The master bedroom has an en-suite bathroom with a soaking tub that looks out to the gardens.  The large back porch opens towards the river and is complete with a wet bar – a great place to relax and enjoy the sounds of nature and the running river.  The cottage is a one-bedroom, one-bathroom home with a large covered porch. It was built for the owners to live in while building the main house and for their personal friends, thus the construction and all the materials are of good quality.  Both houses are completely furnished and equipped so that you can walk in and start living in paradise.The main house can be rented for $ 1,500 per month, minimum stay 6 months. The guest house can be rented for $ 800 / month. The combined rental price is $ 2,000.  The very generous workshop is complete with a bathroom and electricity.  A large back-up diesel generator ensures constant electricity on the property.  The grounds measure over 5 acres on three levels with over 300 feet river frontage. The future owners have the possibility to build more houses or cottages. This a nature lover’s paradise and conveniently located only 15 minutes from Boquete and 20 minutes to David. The owner is willing to consider owner financing.

This fully furnished 3,500 Sq Ft home has so much to offer. As you enter the home, the beautiful natural light through the German-engineered windows will brighten your day. The open floor plan means plenty of space for entertaining or relaxing by the fire. The views from every room of this home are stunning. Large living room with fireplace and patio doors leading to a wrap-around terrace. The beautifully appointed kitchen includes sleek cabinetry, light granite countertops and stainless steel appliances. The spacious kitchen offers lots of cabinets for storage and a butler's pantry. A lovely dining area with a wet bar compliments the living area. The covered balcony includes an outdoor seating area and a fireplace. You will be able to enjoy breakfast while watching the sunrise or sunset dinners with fantastic scenery and a cozy fire burning. The master bedroom on the main level is spacious and includes an ensuite bathroom.

Boquete Plantation is a gated community just minutes from downtown. This home is fully furnished and all you need are your clothes. Upon entering this home the open floor plan is gloriously displayed by the natural light through the glass wall showing off exquisite views. The main living area is spacious enough for a full living room set and a more intimate seating area. There are 2 dining options available with a full dining set or a casual meal at the granite bar. The gourmet kitchen has stainless steel appliances and every chef’s helping gadget needed for a fantastic meal. The mosaic tile work gives a sophisticated touch to the kitchen with ample counter space offered with the large bar. A full bathroom is located right off the main living area. The black decorative iron for the spiral staircase adds a touch of elegance. The upper-level master bedroom has a beautiful ensuite bath that features a jacuzzi tub overlooking the mountains, twin sinks and a walk-in shower.

Located on a 3600-foot high mountain plateau, this apartment within the only residential development in the most exclusive highlands of Boquete.With views of the Pacific Ocean and the Barú Volcano, the unique environment of our residential is nothing short of impressive. Among its many amenities, we have a recreational center with swimming pool, jacuzzi, sauna, gym, rest areas and social areas, as well as a state-of-the-art equestrian center where you can hire equestrian activities, ecological trails, tennis courts and much more , all in a planned community development of incomparable beauty.Boquete has been recognized as one of the best places to retire. Certainly, this picturesque city remains increasingly popular for nationals and internationals.The beautiful town of Boquete is surrounded by steep and leafy mountains to the north, east and west, where the Barú Volcano is located, the highest peak of Chiriquí, at 3,475 meters (11,400 feet); while from the edge of the extinct volcano, you can see the Atlantic and Pacific oceans. Rivers are also abundant in the Boquete area, as is the Caldera River, which winds through the city center.Boquete is located in the highlands of Chiriquí (about 300 miles west of Panama City) and 55 miles northeast of the Costa Rican border. To the north, Boquete is only 7 km (3.3 miles) from the province of Bocas del Toro. Less than 23.5 miles away, to the south, is the City of David with a population of approximately 145,000.Complete with a wide variety of hotels and restaurants, Boquete can meet the needs of Panamanians and internationals living in the area. While small compared to David, Boquete is the most populous and developed mountain community in Chiriquí with a very stable population. Many residents operate businesses oriented to the tourism sector.Boquete, named for its abundance of flowers, is famous for its impressive beauty. The coffee grown in Boquete is considered one of the best in the world and its proximity to tourist and recreational activities that include bird watching, hiking and "four wheel" trips to the Barú Volcano, fishing, golf, rafting, walks Horse, among others, is second to none.While the weather is spring year-round, it can get hot during the day with colder nights; when a sweater is sometimes needed. The temperature in Boquete is generally around 65 ° F to low 80 ° F. Neither air conditioning nor heating systems are necessary in Boquete, excellent for saving energy costs. The mountainous areas are received for receiving considerable rain, but the rain in Boquete often presents itself as a "bajareque" (light rain); in the afternoon followed by the appearance of rainbows.Boquete is quickly becoming a world-famous retirement destination for all reasons recently and more. Boquete has been rated as one of the best retirement destinations in the world. The reviews in Boquete are always at the top of everyone's list4 luxury condos per building3 bedrooms / 3 bathrooms  (Loft / 3rd bedroom) in First Floor Condos Dressing room in the master bedroomBuilt-in drawers in all closets.Large terraces and balconiesCathedral ceiling in first floor condominiumsMain appliances (refrigerator, stove, microwave, dishwasher, water heater, washer and dryer), fans and ceiling lamps includedGarden area in ground level condominiums1 covered garage per condoReady for immediate occupation* Areas including garages, hallways and storage areas.** Furniture not included in the sale price

Lovely 1883 m2 building lot located in Santa Lucia in an area of many upscale homes. This flat property has stunning mountain views and is ready to build that dream home. Call today for details.

This spacious two-story 6 Br, 4 1/2 Ba beauty is located in Alto Boquete, just minutes from downtown. As you pull in the first sight is the beautiful large wooden doors. Upon entering the home your eyes are drawn to the tray ceilings, an astonishing chandelier and the intricate design of the tile floor. This enormous open floor plan has plenty of space for entertaining family and friends. The French doors connect the indoors and out and allow plenty of natural light. The bay window offers additional lighting and a comfy bench seat for relaxing or reading your favorite book. The dining area separates the living area from the kitchen. The kitchen includes all stainless steel appliances, ample granite counter space, an island provides additional storage underneath. This contemporary kitchen is perfect for the frequent entertainer, truly a room of elegance and style. The main floor also hosts 2 bedrooms and 2 and 1/2 bathrooms.

Here is your opportunity to own a slice of paradise. If you have dreamed of living in the country, here is your opportunity. Situated on a 3 plus hectare lot in Palmira and just 20 minutes from Boquete. This lovely 2 bedroom, 2 bath home built in 2013 offers an open floor plan with high ceilings giving it a lovely open and airy feel. We love the large kitchen with sleek cabinetry, dark granite countertops and stainless steel appliances. There's also a large pantry/laundry room to store all of your goodies. Spacious master bedroom, with a generous ensuite bath and walk-in closet. A private covered terrace for alfresco dining or just relaxing while you take in the incredible mountain views. There is also a caretakers cottage that could be used as a rental or for extra guests. Beautiful tropical gardens and fruit trees are abundant. It comes with a greenhouse too!

This house is a perfect home for those are looking for an elegant house and walking distance to town. You will love the oversized kitchen with beautiful custom cabinets, granite countertops and stainless appliances. High ceilings provide a feeling of space and openness in this open concept design. Master Bedroom is very spacious with a lovely en-suite bath and walk-in closet. The Guest Bedroom boasts a Murphys bed for your overnight guests or can be used as an office. Large patio doors leading to a beautiful covered deck where you can enjoy the river with your morning coffee. This lovely home comes fully furnished and is maintenance-free. Call today.