Ideal lot for your country house or permanent residence, located 4 minutes after the picturesque town of La Pintada, an area of river sources and beautiful mountain views, on the main road that leads to LLano Grande, just before the small community, adjacent with a river in its back, magnificent to complement with gardens and vegetables around your dream home in Coclesanas lands and the tranquility of an environment and nature with beautiful landscapes and nearby amenities for lovers of excursions and internal tourism. Twenty minutes from the Penonome shopping center. Good time to buy this property at a super price, half a hectare with flat topography with 30 meters in front and 30 meters of river behind.Jessica Sosa(507) 6470-9446jessica.sosa@kwpanama.com

This gorgeous, unique tract fronts the largest surf break in the Caribbean :SilverBack! A right-hand big wave reef bottom, Silver Back breaks out off Punta Toro, in front of the property; waves in the 20 -30 ft face range have been spotted. There are a half dozen breaks minutes away for all levels. The property has approximately 250' of beachfront, natural fresh water springs that can support fruit and vegetable gardens. There are currently plantings of producing banana trees and coco palms. The property has been professionally surveyed, and is completely fenced. The neighbors on all sides have been there for many years, and are all friendly and cooperative. There is a good location for a concrete dock that would service the property from the sea. There is also access over the ridge from the village of Bastimentos. The property has been professionally maintained for many years, and is in good condition. 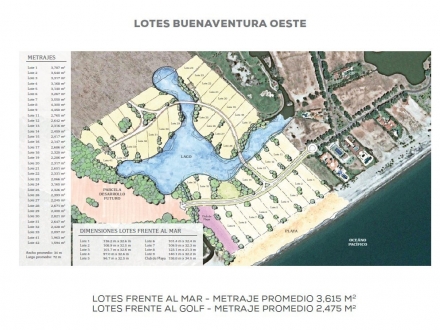 Looking for land where you can build your vacation home to your liking? Take advantage of this opportunity to acquire your lot within the Coronado Golf Club. 1,255 m2 at a reduced price below the appraisal to $ 115,000 For more information, contact us today! 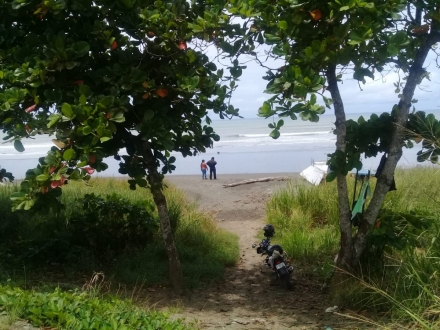 From this 400m2 corner lot you can see the ocean and walk there in one minute flat. A small structure is on the property and can be upgraded to be used as a holiday house with no problem. There is an estimate from a US contractor to build according to the attached floor plan for $ 20,000. The municipal permit for this house reconstruction comes with the lot. The permits for electricity & septic tanks have already been pulled. The municipal water line is in front of the property. Initial drawings and percolation tests have been done for the development of small condo building with 4 units. A neighbouring lot features two units and both are permanently rented for $ 450 a month.   The property is Rights of Possession but can be titled.  Puerto Armuelles is a friendly beach town in western Panama. Beaches like this aren’t common in Panama — the mainland’s coastline doesn’t have many beaches that are accessible for swimming and strolling. It’s still a somewhat under-the-radar destination, and travelers here can expect to have plenty of the beach to themselves. For many years, much of Puerto Armuelles served as Chiquita Banana plantation land. Once plantation's workers harvested bananas, they would pile them onto ships waiting in the harbor. After a major worker’s strike, Chiquita left, and the population shrunk considerably. When you walk around town, you can still see the old plantation houses. Although many locals left after the banana industry was uprooted, today the community has attracted a significant community of expats, who are mostly drawn in by the town’s affordable beachfront property. The town’s long beach is a welcoming place, with a popular tier for fishermen, who sink their lines to catch the many species of fish that thrive in the cold Pacific waters. The seafood and abundant fruit trees support a healthy lifestyle, along with plenty of time in the fresh, seaside air.

Yes, you are one of those people who love peace and tranquility, who like to be on a pristine beach with very few people around. Playa Juan Hombrón is the ideal place for you. The Juan Hombrón beach is 140 km from Panama City. There are and some rest houses. In this small town there are no places to stay, nor restaurants or other services, which makes it special. This spectacular land in front of the sea in Juan Hombron, ideal for developing a residential and hotel complex, resort type. This beach has white sand and calm waters, on this beach you can enjoy many outdoor activities related to the sea. It is located very close to Buenaventura and Playa Blanca, and where within a few minutes you will find supermarkets, pharmacy, medical centers, shopping malls with different stores and restaurants and other amenities that will make your life very easy.

10,000 m2 lot with ocean view in Cambutal. $169,000 Cambutal is a district located in the district of Tonosí in the Panamanian province of Los Santos. In 2010 it had a population of 511 inhabitants and a population density of 2.8 people per km². Cambutal also has a large wooded area, additionally it has part of Cerro Hoya National Park. Playa Cambutal is a quiet beach town in the south of the Azuero Peninsula. It is more popular with surfers and deep-sea fishermen, but its attractive coastline will be of interest to almost all people. Surfing is still one of the main reasons why many travelers visit this site. The waves are good and with few people, most break to the right either on the reef or on the beach. Tourists who come without a surfboard can rent them at one of the nearby hotels. Fishing in Cambutal beach is also quite good. That is because the seabed plunges steeply beyond the coastline, creating an area that is ideal for many large fish, including rooster fish, breast

Land near Beach and Golf Course.