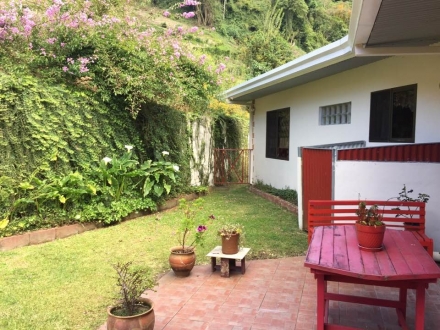 Beautiful hilltop home in Cerro Punta, overlooking its own 1/4 acre, kale, rosemary, lettuce, broccoli, celery, cabbage, etc.) Ahead a green meadow of a thoroughbred horse ranch, Baru Mountain.  Back yard looks toward the rain forest, no building or cutting of trees allowed.  Tile flooring in living room area with 6-sided wood ceiling.  Laundry room and pantry room.  Property has concrete tool shed, equipment shed, possibility for chicken coop and rabbit hutches.    The current owner has a Chinese buyer in Panama City who takes the crops (almost like a contract) and is very good on paying. Not many farmers have this advantage, so buyers would have a good start, if they wanted to continue farming on a small scale. Very quiet, peaceful, no traffic.  The house has 20 years of tax exemption. Cerro Punta is a town and corregimiento in Tierras Altas District, Chiriquí Province, Panama. Cerro Punta is located in Panama's western highlands at an altitude is 6,500 feet (2,000 metres), just south of the Continental Divide. Many of the inhabitants of the village and the surrounding areas are indigenous Native Americans. The climate, like the rest of Panama, is tropical with a short dry season and rainy season that extends about 9 – 10 months of the year. Night time temperatures are often cool due to Cerro Punta's relatively high elevation. During the 1970s much of the land was used for cultivating strawberries; households also maintained small mixed-vegetable gardens. The village can be reached by traveling north from the Pan-American highway. Cerro Punta is named after a hill with that forms which is the highest point of the village at 2300 meters. The original name Cerro de Punta, original name is credited to the Chircana poet Caval Beatriz Miranda, who taught grade school in Cerro Punta. In the 1940s in a meeting to choose the name of the town said: "Cerro Punta your name is written in your mountains." Cerro Punta has a fairly rugged terrain, with small plains, where most people live. Outside the main area of the town, the houses are widely spaced and the surrounding area is cultivated. Chiriqui is the most mountainous and highest province in Panama, and Cerro Punta is the highest town in Chiriqui, with elevations ranging from 2000m to 2200m. As such, it shares the tropical rainforest climate of the rest of Panama, with at least 60mm (>2 inches) of rain every month, but is considerably cooler due to the high elevation. Typically, the annual temperature range in Cerro Punta is between a low of 14 C in January and a high of 32 C in April. In terms of extremes, on the very coldest days in Cerro Punta, temperatures may go as low as -1 °C (30 F). Temperatures exceeding 37 C are rare. Winds are typically light for most of the year, but are strongest during the dry (and sunniest) season, late December through early April. The rainy season in Cerro Punta (like the rest of Panama) is from late April until mid-December, peaking in September, October and November. Most rain occurs in the afternoon. Hailstorms occasionally cause some damage to crops such as peas, beans, herbs, cucumbers, strawberries, potatoes, lettuce, coffee and others. Cerro Punta is divided into several villas such as Guadalupe, Bajo Grande, Entre Ríos, Las Nubes, La Garita, Barrio del Bajito, Las Miranda, Barrio 6, El Pueblo, Las Cumbres, Alto Pineda, El Barrio de la Chacha, Nueva Suiza, Alto Bambito; all of which are situated above 2,000 meters. It has a land area of 105.1 square kilometres (40.6 sq mi) and had a population of 7,754 as of 2010, giving it a population density of 73.8 inhabitants per square kilometre. The local economy is based on agriculture. The land is very fertile as a result of being on the slopes of a dormant volcano and due to the cool and moist conditions associated with the higher elevation. Northern Chiriqui has a different kind of climate from the rest of the country, enabling the successful propagation of some crops that would be impossible in the rest of Panama. Tourism has become another source of income in recent years as the region has a temperate climate, relatively cold within one of the tropical regions in the world. This is interesting for nationals living in the rest of the country and for tourists, because one can enjoy the change of climate and different ecosystems on the same day. At the highest part of Cerro Punta, the village of Guadalupe at 2197 meters, agriculture dominates but agrotourism and ecotourism are increasing as many come to enjoy the climate, flora and fauna of the Parque Internacional La Amistad (Panama and Costa Rica). Hiking and river rafting are popular activities. Thoroughbred horse farms are being developed in this area due to lower temperatures and the high elevation (lower oxygen content in the air) makes race horses develop better lung capacity, enabling them to compete successfully in international competitions. 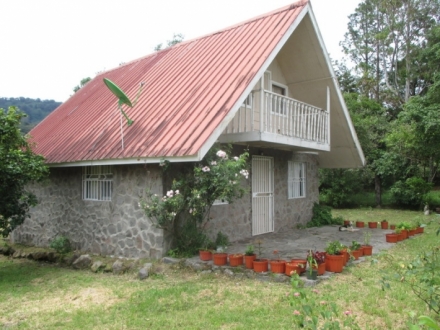 In the quiet town of Paso Ancho, just 3 kilometres from Volcán, lies this quaint two-storey house. The lower floor has a large bedroom, a full bath and a living room with kitchen. The upper floor has 2 bedrooms, a bathroom plus a large room that can either be used as a further bedroom or an office. The water is municipal and costs $5 per month. The property is fully fenced and high above the river so not in danger of being flooded. At the end of a cul-de-sac road, the house is easily accessible from the main road, as the street is paved up to 30 metres from the house, where it turns into a dirt road. Volcán is a small and beautiful town located in the folds of the Barú volcano, which is often surrounded by clouds, the highest peak of Panama, 3,475 meters (11.460 feet) above sea level in the western province of Chiriquí.  The Chiriquí province, in Panamá, is a new tourist destination with an abundance of natural resources such as mountains, sea, islands, rainforest, coral reefs, trails, volcanos, beaches, most of them surrounded by or within national parks and natural reserves, with rich Indian cultural roots, like the Ngobë Indians, in an environment naturally designed to enable many activities like travel, scuba diving, trekking, snorkelling, rafting, canoeing, fishing, bird watching and many more. Deep in the valleys of the Central Mountain range, among hundreds of waterfalls, between wooded canyons and thousands of wild flowers, we discover small towns that have their own enchantment. Volcán lies in a zone of “cold” climate, of mountainous landscapes and a great agricultural production. Here the houses and properties are constructed in the central European style, making us remember that Swiss people arrived here, long before the highway to Volcán was built. The Swiss were followed by Yugoslavs and Germans.