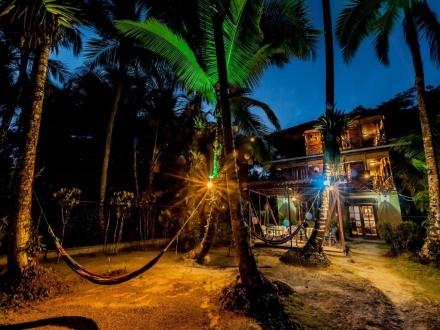 Nestled in the quiet hum of Panama’s Caribbean islands, you will find this one-of-a-kind hotel on the beach of Isla Carenero, just a five minute boat ride from the main island Isla Colón in the archipelago of Bocas del Toro. Operational for twelve years, the business is turn-key and profitable. The entire business is included in the sale: The main house with its bed and breakfast set-up can accommodate 22 people in its 7 rooms and penthouse two-bedroom suite with a living room and a private balcony with superb views. The three-story house of 500 square meters is designed with large French windows, wrap-around deck and open sheltered balconies complete with hammocks where you can marvel at the views of the Caribbean Sea and enjoy the peaceful surroundings The adjacent lot with two additional income-producing two-storey houses, which can be rented long-term for $ 1000 / month or $ 100+ / day. A beach-front lot in front of the hotel A dock and pier with a concession granted for future expansion for up to 60 metres (200 feet) Some of the pastimes available in the area are Scuba diving Surfing Snorkeling Bird watching Private island exploration tours Turtle watching The current owners have all the concessions. If you are looking for a beautiful place to live in Panama with an immediate positive flow of income guaranteed by excellent reviews – this is your perfect choice! 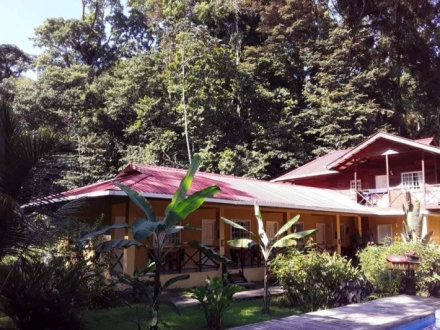 Small boutique hotel Turney key, among the number 1 in booking.com Building built in 2017 with top quality materials of 300 square meters on a plot of 3,000 square meters of beautiful tropical garden.It consists of 5 large bedrooms, all with bathroom, with inverter air conditioning, with television, all with terrace and all furnished. Fully equipped kitchen and large living room. The large master bedroom occupies the entire first floor with a huge bathroom and a dressing room that can be converted into another room if you wish.Property titled and registered with a company for easy sale of it. The property has electricity, mains water, internet and cable TV. It also has two tanks of 4,000 liters each for water storage.The plot has a pedestrian entrance and a vehicle entrance, with sufficiently lit interior roads that surround the construction and is fully fenced. It has a pool of 12x4x1.5 meters, ideal for relaxation.The property is 150 meters from a quiet beach, almost always lonely and bathing is possible all year round. This beach has a pier for community use. The property is 2.5 kms from the main town reaching the road to the door and even the supermarkets will send the purchases to the door if you wish.The property is ideal for a small luxury business or large family. 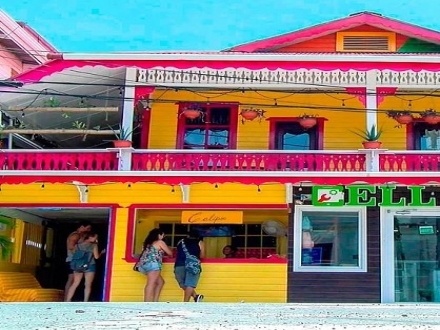 Over 115 years old and still going strong! Calipso Hostel is the perfect place for those who are searching for a beautiful and convenient accommodation. It was built in 1909 and is one of the oldest representations of the gingerbread afro-Antillean architecture. Calipso Hostel, located in the main street of Bocas Town, can offer you a quiet stay and at the same time the comfort of staying in the "heart" of Bocas del Toro.  Only 5 minutes to the dock and right next to a supermarket. 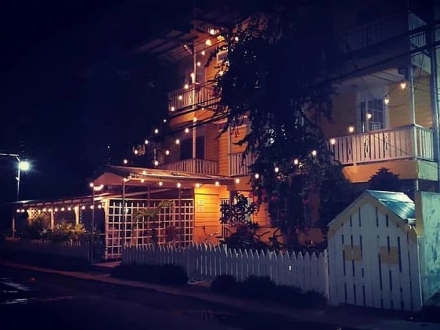 If you have dreamt of having a turnkey, income producing investment in Bocas Town on the Island of Colon in the Caribbean Sea - this is your opportunity! Calipso Apartments is an apartment building built 3 years ago, emulating a ginger-bread style, adapting to the typical style of this beautiful Caribbean Island in Panama. The building has 4 floors, each with 6 apartment units. All the apartments are fully equipped, have a double room (double bed, wardrobe and fan), full kitchen (refrigerator, stainless steel stove, extractor and microwave), living/dining room (wooden table for 4 people, sofa and TV, air conditioning and access to private balcony) and a full bathroom with hot water. The 24 apartment units measure around 55 m2 and are currently being used as rental housing. We have a high occupancy throughout the year, the average rent is $ 450.00 per month, including water consumption, wireless internet, cleaning of common areas, etc.. The average stay of the customers is 8 months. In the middle of everything, but quiet and safe: this charming turnkey apartment building in the local style offers all. It is situated  on G Avenue, in front of the Hospital Bocas del Toro, Colon Island. 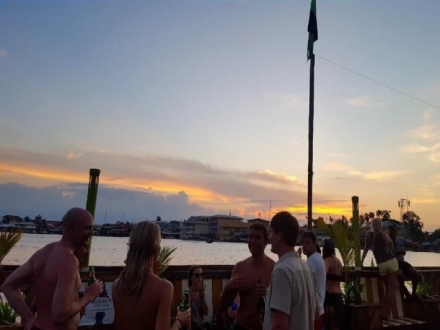 Business Overview Aqua Lounge is a world-renowned hostel built entirely over the warm Caribbean waters of Bocas del Toro, an island paradise tucked away in the north-east corner of Panama. The business has been successfully run for 10 years, and has a stellar internet presence world-wide. Aqua Lounge is located on the southern tip of Isla Carenero, facing Bocas Town and its amazing sunsets, walking distance from some pristine beaches and some world class waves. A thirty second boat ride, will get you to and from Bocas Town, where all the shops, restaurants, nightlife and airport are located. The hostel offers a variety of dorms and private rooms at reasonable prices, our bar is famous for its events and chill vibe and the restaurant is a year-round favorite for locals and tourists alike. Property details The hostel is built entirely over the Caribbean sea, part of it consists of two pieces of land, denominated “Finca n° 1183” and “Finca n°1185” which are titled and owned by Agua Azul S.A., the rest of the builtis built on  granted land given by the Panamanian government (right of possession), which lasts for life, also given to Agua Azul S.A.  Buildings: • Sundeck and 2 natural pools, which include a trampoline, dive tower, swings and lounge beds. • Common inside area, includes the bar which is open to the inside and outside and multiple chilling areas located elsewhere in the hostel. • Reception bar and kitchen, this is where the restaurant is currently working. • Storage room and third natural pool in the middle of the hostel • Rooms: two large dorms with capacity for 12 people each, private bathroom inside each of them; three double private rooms with queen size beds; one quintuple room and one quadruple room located on the second level; two private room with capacity for 4 people each; a large dorm for 7 people. • Private apartment also located on a second level. • Laundry room, maintenance warehouse and storage rooms. • Massage room  See reviews under http://www.hostelworld.com/hosteldetails.php/Aqua-Lounge/Bocas-del-Toro/276145 Geographic and Demographic facts of Bocas del Toro Bocas del Toro is a province of Panama, comprising the mainland and nine main islands. The province consists of the Bocas del Toro Archipelago, Bahía Almirante, Laguna de Chiriquí, and adjacent mainland. The capital is the city of Bocas Town on Isla Colón. The Bocas del Toro Archipelago is a group of islands in the northwest of the Caribbean Sea in Panama. The archipelago separates Bahía Almirante and Laguna de Chiriquí from the open Caribbean Sea. The major city is Bocas del Toro, also called Bocas Town, on Isla Colón. The islands are accessible by water taxis and private boats. Isla Colón is accessible by airplanes, ferries, private boats, and water taxis. Bocas del Toro "Isla Colón" International Airport, located just west of Bocas Town, provides air transportation to and from the island to Panama City, San José, Costa Rica, and Changuinola city. The ferries serve Bocas Town from Almirante, Changuinola, and Chiriquí Grande. The archipelago consists of Caribbean islands and waters with rich biodiversity and an ethnically diverse human population. Following a relatively stagnant economy from the 1930s to the 1990s, a tourism industry began to form in Bocas as a result of political and economic shifts. The Panamanian government promote foreign investment, resulting in the rapid development of Bocas del Toro as an exotic tropical tourist destination and a massive influx of tourists to the archipelago. 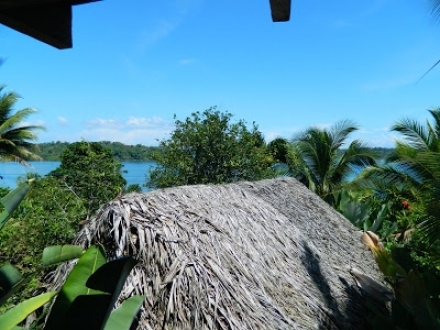 As the name suggests, Beverly's Hill is a tranquil and secluded garden getaway set on a green incline up from the main street through Old Bank, Bastimentos. Away from the hustle and bustle of Bocas Town, Bastimentos is an altogether more authentic Caribbean experience and Beverly's Hill is the ideal place to spend a few days there. All of the accommodation is in wooden cabañas set in the garden of the property. The main house has 2 bedrooms & 2 bathrooms with a sea view from the main bedroom. Plus two kitchens; one for the owner and one for the guests. The rustic cabaña has a double room next door to a single with a sea view from its deck, its bathroom is just outside in the garden. The cabaña behind has 2 doubles and an upstairs attic with 2 single beds, all sharing a bathroom and a kitchen. Lastly the 2 suites, one above the other, both  with  double beds. The upstairs 'Room with the View' has maybe the best view in Old Bank. The room no # 6 has views too & is popular with bird enthusiasts.  All together, there are 13 beds in 9 bedrooms. All cabañas have chairs and hammocks on their own verandas and have mosquito nets. At the bottom of the garden by the main house is a great palm-thatched rancho communal space with hammocks, tables and chairs and sofa with magazines and a fan to keep you cool on hot Bocas days. The garden is full of bird life from hummingbirds to large birds of prey as well as the famous small red frog that can be spotted hopping amongst the foliage daily. Free wifi is available to guests with their own computers and water refills using their rain water filter. There is a laundry service. Adjacent to the lot is another half lot of 200 square metres which is not yet titled but comes with this property and has space for another cabaña.