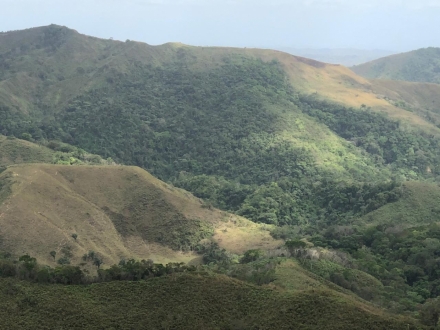 PROPERTY FOR SALE IN LA ONDA, LA PITALOZA, LOS POZOS, HERRERA PROVINCE. 229.808 ACRES OF LAND. Undulating topography, primary forest, special for sale of carbon, livestock and has mineral deposits, abundant water, virgin forests and sectors for livestock. This property is located 38 kilometers from Macaracas, has access by asphalt road for approximately 30 kilometers and 8 kilometers in selected material, the water precipitation is very high, the climate is between 22 and 28 degrees; and is located approximately between 350 meters to 450 meters above sea level. ABOUT THE PROVINCE OF HERRERA Herrera is a Panamanian province located in the north of the Azuero Peninsula and its capital is the city of Chitre. It is bordered to the north by the provinces of Veraguas and Coclé, to the south by the province of Los Santos, to the east by the Gulf of Parita and the province of Los Santos and to the west by the province of Veraguas, specifically by the district of Mariato. A crossing point between important sub-regions of the Azuero Peninsula, the province of Herrera is crossed by two major routes: from south to north, the National Highway; and from east to west, the Pan-American Highway.

Apartment in PH Parkside, in front of the Costa del Este Park. It has 1 bedroom, 1.5 bathrooms and 1 parking lot.

Surrounded by Nature in the community of Clayton. This beautiful apartment hasA balcony that allows you to enjoy a spectacular view of the nature of Clayton, bird watching at sunrise and sunset.It has 1345 sq. 3 Closets: in all bedrooms, 2 baths + 1 more for service room, Kitchen with fine cabinets and granite countertops, fully equipped with refrigerator, Stove, grease extractor, and water heater; Ceramic floors; Gypsum board ceiling roof details in living-dining room, new gas installation in the apartment with Pex pipe and covered with gypsum trim. Social area: complete with two pools, sun deck, gym, BBQ area. 24/7 security. Power plant both for the common areas of the building, and for the interior of each apartment. Recently Painted Building, new roofs in all areas, and waterproofed treatment. This residential area location is very quiet and very close to the Kiwanis sports area.Make the best friends in this residential with only 64 families in total.We're at your service.

Apartment in excellent condition. Located on Ave. Balboa. It has 2 bedrooms, 2 full bathrooms, living room / dining room, kitchen, balcony and laundry. The unit has 1 Parking, located in the garage area, and with several parking spaces for visitors. The property includes: Appliances, air conditioners (almost all INVERTER), and some curtains. The tower has excellent common areas such as: Gym, swimming pool, party room, racquetball court, etc. Building has 24/7 security. Smart Home design is included.