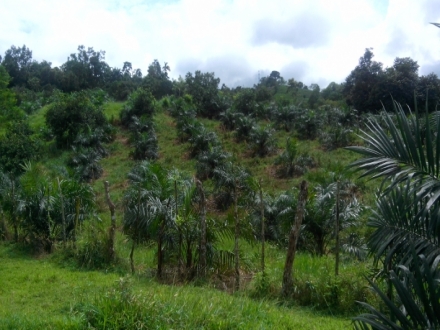 The farm has 12 hectares with 1195 m2, is located in San Isidro, Paso Canoas. 25 minutes from David airport, accessible road, electricity, drinking water, 1 cement house with 2 bedrooms, 2 storerooms. View of the Pacific Ocean, Puerto Armuelles. On the property you can find fruit trees like guanabana, oranges, lemons, 1 hectare cane, pipes, guavas, mandarins. Living water runs all year through the middle and joins with another eye of water that runs all year too. It has chutra, corral, iron gates, improved pasture, galley indoors with large troughs. It has 5 hectares of palms of 4 years of deliporghana variety, already producing. The rest is improved grazing for livestock. The owner is willing to offer financing. 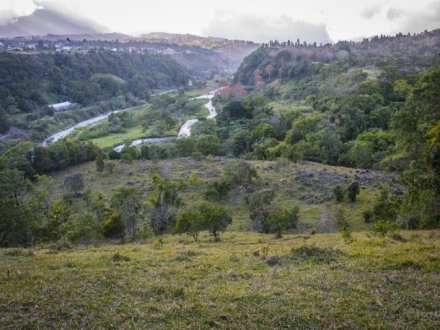 This beautiful farm lies within walking distance to Boquete, in Jaramillo Abajo. It has electricity and sewerage to the edge of the property and an open view to the volcano Baru and borders on the Caldera river which runs through Boquete.  The property lends itself perfectly to a residential development project due to its vicinity to town, its slightly hilly structure and the bordering river. But it would also be a beautiful private farm with cow and horse pasture. We can sell the company Zafiro or the land.  Whatever is easier. We have the plans but we have not tried to obtain approval. So they are not yet approved to build. The coordinates should be on the plans and PDF files.      The town of Boquete (pronounced bow-keh-tay) is nestled in the highlands of the fertile province of Chiriquí in western Panama. It is a town of about 6,000 people and a retirement haven for expats. English is commonly spoken. Flowers of kaleidoscopic colours cover the hills and towering mountains form breath-taking vistas. In the distance you can see the stunning Volcán Barú rising up through the misty clouds while the Rio Caldera flows through the town, soothing residents and visitors with its gurgling sound. Because of its location in the mountains, Boquete enjoys a cool climate, and this attracts Panamanians and expats alike. Due to the elevation, daytime temperatures are generally in the 70s F and 80s F, with cooler nights. The spring-like weather makes Boquete ideal for full-time residents and snow-birders alike. Boquete is only 20 minutes from David, Panama’s third-largest city, via a four-lane highway. David is the commercial hub of the region, with many shopping options, all the services you might need, government offices, and medical providers. Two top-rate private hospitals offer affordable and accessible health-care to residents of Boquete and all of Chiriquí Province. People who live in Boquete also love the fact that the beach is only about an hour away. The Gulf of Chiriquí forms the southern border of Chiriquí Province, and several beach areas beckon those seeking fun in the sun and sand. Golfers can choose from various top-notch golf courses. As is typical in the Chiriquí region, agriculture remains important to the local economy. Rich, aromatic coffee beans are grown here on farms that dot the hillsides. Citrus is another major crop, with orange groves among the slopes. Boquete has a well-established expat population and is one of Panama’s top expat destinations. With all it has to offer it’s easy to see why. Near-perfect climate, gorgeous natural surroundings, healthy lifestyle options, and a near-endless variety of social events and activities…it might be perfect for you. 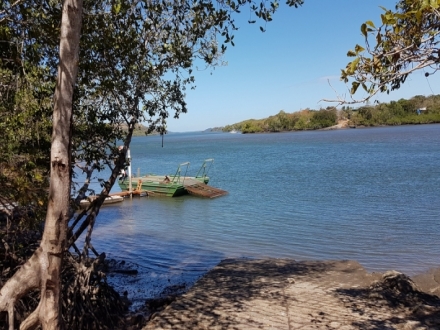 This one-of-a-kind property on Boca Brava has everything: beachfront, ocean view, various building-sites for (limited) development, wells, electricity, dairy, stables, houses for employees.  Beautiful views of bay- and Pacific. The finca borders on the bay (Boca Chica) and Pacific ocean. Ca. 10 ha. pasture for cows or development. Various water wells. Electricity from mainland. Four houses for employees, milkery and stables, barns. Water, electricity, roads, all infrastructure installed. Easily accessible, as it is only 300m from mainland Boca Chica. Connection with mainland by (car) ferry. Of the 18.7 hectares, 13.7 are titled and 5 are right of possession. Video by: John R Hampton, NotSereyus Productions 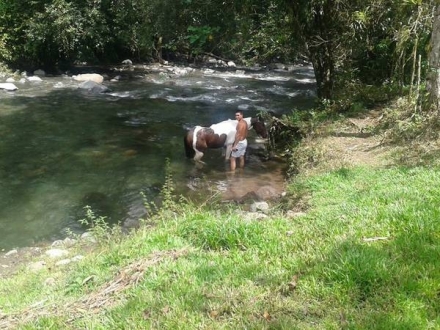 Beautiful river-front land with over 250 meters of river frontage on one side and 300 meters creek frontage on the other boundary. The climate is very agreeable, as it is located at around 300 metres above sea level - cool, but not cold. The area is cattle country and many farmers have settled here due to the fertile soil. There are impressive, big trees on the property. The river is very pretty and see-to-the-bottom clear,. It is easily accessible, as it lies in Bongo, just 5 minutes north of Conception, east of the Volcán highway. Many high ground spots offer themselves as building sites. Public water has been brought to the edge of the property, and electricity is at a house a few feet from the property line on the east side. On the south side are a couple of no-longer-used fish ponds through which a stream runs and which can easily be renovated and used to raise trout or tilapia. 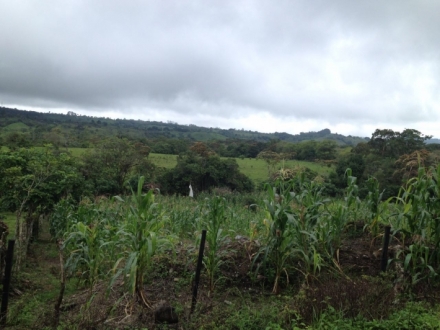 At an elevation of 1200 metres above sea level, this farm of 12,56856 hectares offers a comfortable average temperature of 23° C. It lies in community of Cordillera, in the district of Boquerón,  It is flat and ideal for cattle or any other sort of farming. Horses, goats and sheep feel comfortable at this level. It is easily accessible by asphalted road. 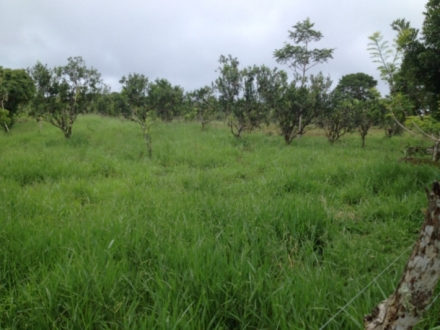 A flat piece of land in Santa Rita, Boquerón, measuring 11.899445 hectares Very agreeable climate with an average temperature of 25°C, at an elevation of 1,050 m above sea level 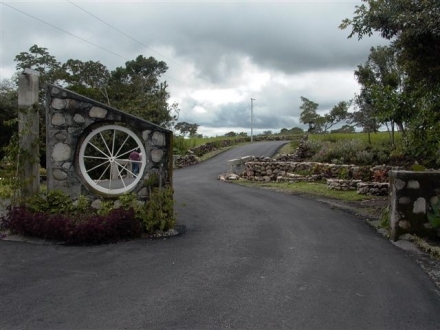 8 hectares on the main road from David to Boquete for sale! This property lies between Los Molinos and the main road and is therefore ideal for development. the price of only $ 20 per square metres makes it very attractive, as the current price is $ 40 - 60 per square metre.  In Spanish, the word Boquete means 'gap or opening'. It was through this gap that curious gold seekers trekked, looking for a cheaper and quicker way to the Pacific. Farmers began settling in the region near the end of the nineteenth century. . In addition to tourism, its main industry remains agriculture, especially the growing of coffee beans. Boquete is well known for its coffee, judged to be among the finest in the world. Boquete boasts a very lively music and arts scene. The annual Boquete Jazz & Blues Festival is the second largest jazz festival in the country after the Panama City Jazz Festival.  A performing theater group, named Boquete Community Players (BCP) is a Panamanian foundation and is operated as a not-for-profit organization. Its venue is a restaurant and bar in the center of Boquete alongside the Caldera River. The mission of BCP is to sponsor, produce, and promote artistic events to enhance appreciation for and understanding of the arts, and to promote a cohesive sense of community. BCP produced its first Spanish language production in 2015. An interesting "side activity" of the BCP is the weekly market at the BCP facility coincident with a weekly information and discussion session at the BCP theater. These joint market and information meetings have come to be known as the "Tuesday Morning Meetings" (TMM). Through time and with the demonstrated community interest, the Tuesday market has become a very significant community activity. Visitors to Boquete are frequently advised to visit BCP on Tuesday mornings because it is such an integral part of the community. The Tuesday information meetings, and especially the Tuesday market activities have been a big success, not only commercially speaking, but more importantly in the integration of the locals and the expatriates working side by side. Some of Boquete's landmarks include nearby Volcán Barú, an active volcano and, at 3,475 meters (11,400 feet), the tallest point of land in Panama. Hikers enjoy a relatively easy hike up and over the volcano, along the Sendero de los Quetzales, which runs from Boquete up to Cerro Punta and Volcán, on the other side of the volcano. The Caldera River runs through the town. There is a large community of ex pats in Boquete; over 3,000 foreigners permanently living in Boquete, from over 30 different countries. Although Americans and Canadians comprise the majority of ex pats, there is also a large group of immigrants from Colombia and Venezuela, and the third largest group of immigrants are from European countries. This increase in immigrants has stimulated the growth of new industries and business, owned both by locals and foreigners. The most relevant industry is the hotel industry; there are currently over 50 accommodations in Boquete, ranging from 5 star resorts to backpacker's hostels. Along with hotels, many new restaurants have opened in Boquete. Several other businesses oriented to serve tourists in Boquete: golf, river rafting, trekking and hiking, canopy tours, biking and many other outdoor activities for visitors of all ages. 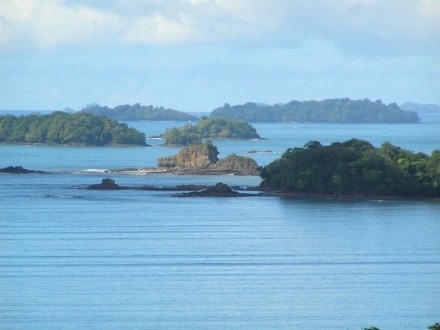