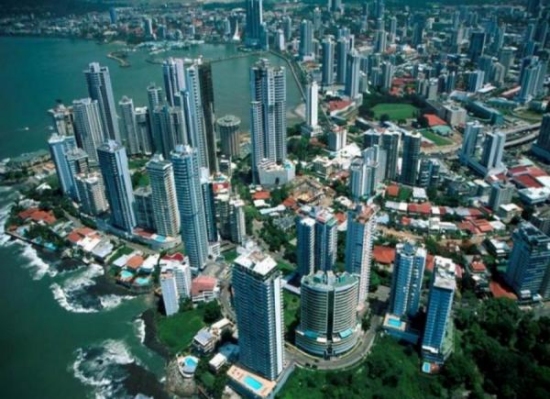 Panama City is the capital city of the Republic of Panama and by far its largest and most modern city.  There are over 1.2M people residing in the metro Panama City area.

Panama City is situated on the Pacific Coast at the entrance of the Panama Canal.  Panama City is the political and administrative center of the country as well as a hub for international banking and commerce, with the most modern and successful International Banking Center in Latin America, offering investors over 100 Banks from more than 32 countries around the world. The city also has a sophisticated technical infrastructure and fiber optics, high-end retail shopping, casinos,  restaurants, hotels (including a Waldorf Astoria, Trump, and Hardrock Hotel to name a few), as well as the Metropolitan Park which borders Panama City to the north.  The Metropolitan Park is comprised of tropical rainforest with great biodiversity and it is often referred to as the lungs of Panama City.

Being the economic and financial core of the republic, Panama City's economy is mostly service based, heavily geared towards banking, tourism and commerce.  The economy depends heavily on trade and shipping activities associated with the Panama Canal,  Ports and Transcontinental Railway. The city has benefited from significant economic growth in recent years, mainly due to the 5.2 billion dollar expansion of the Panama Canal, an notable increase in real estate investments, and a stable banking sector.

Panama City is responsible for the production of over 1/2 of the country's Gross Domestic Product due mainly to the fact that most busines are based out of Panama City and its surrounding metro areas.

Tourism is one of the most important economic activities in terms of revenue.  Panama City's hotel occupancy rate has always been relatively high, reaching the second highest for any city outside the United States in 2008.

Panama City has become a cosmopolitan modern metropolis, with many modern highrise buildings overlooking the Bay of Panama in exclusive residential areas, such as: Balboa Avenue, Costa del Este, Marbella, Punta Paitilla, Coco del Mar, Punta Pacifica and San Francisco -- all of these areas offer a good range of apartments and condominiums for sale.

Panama City has a rich history that extends back to the 16th century. The original Panama City (known today as Old Panama) was sacked by the infamous pirate, Henry Morgan. The second Panama City of the Spanish colonial days is visible as the section of the city known as Casco Viejo which is comprised of a mix of Spanish Colonial architecture from the 1400's and French Colonial Architecture from the 1800's when the French made their attempt at construction the Panama Canal.

Apartment For Sale in Parque Lefevre